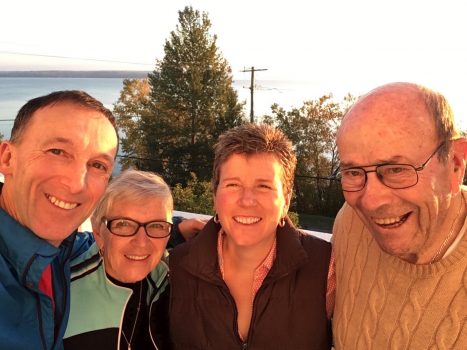 The Debate Around the Spelling of Temiskaming

I need to warn you that the most difficult part of discovering the area is learning how to spell the word Temiskaming. To start with, there has been a hundred year’s debate in Ontario about spelling the word Temiskaming: Is it Timiskaming or Temiskaming? The government of Ontario continues to spell it with an I such as the Timiskaming Health Unit. The francophone community of Ontario spell Témiskaming with an accent. On the Québec side the lake is spelled Témicamingue. However the town of Témiscaming is also a different spelling. The original root of the name comes from the Algonquin Temikami or Temikaming, from ‘tim’ meaning deep and ‘kami’ meaning open waters.

Our Departure for the Lake Temiskaming Fall Tour

We left Haileybury a little bit after 9am. If you are to do all of the Lake Temiskaming fall tour in one day, I would suggest leaving earlier to have a chance to take in more of the activities. Fall view from the Larose bridge in Cobalt

Our first stop was Cobalt. The leaves were just starting to change colours and and a photo from the Larose bridge with the Right of Way Mine and the Cobalt Station in the back is always a must. We were to early to visit the newly renovated Cobalt Station, one of the few heritage building in the area, where Hometown Décor Emporium has found a home. Winnie and Cindy do a marvellous job of finding treasures and giving it a second life. The renovated station is certainly worth a visit.

On our way to North Bay, we had planned to stop at the Temagami Fire Tower that is 1300 feet above sea level.  The attraction gives you a panoramic view of the ancient forest and lakes of the area.  But the morning was just too foggy so we skipped this stop.  The stop is good when travelling with seniors as the view from the bottom of the fire tower is impressive on its own, even if you don’t want to climb the 100 feet to the top of the tower.  It will be for a next time.  After Temagami, the fog started lifting and the fall colours started to appear as we were travelling highway 11, heading south.

Our Stop in North Bay

In North Bay, we parked at the old railroad station which was converted into the Discovery North Bay Museum. In the Fall, the museum hosts a Haunted walk of the downtown of Friday night. The guide gave us a glimpse of the tour by giving us the details of the ‘blood stain story’ in the museum. My father didn’t believe any of the tale but it was entertaining hearing the story. The City and its partners have done a great job revamping this part of town – linking the waterfront with the downtown was certainly a visionary move. It was Wednesday, therefore the Farmer’s Market was open so we walked around and talked to a few vendors while a musician was sharing his passion. If you are coming through on a Sunday, the market is open on the corner of Wyld Street and Oak Street from 8:30 until 1pm.

We had intended to walk the downtown where there is more than a dozen restaurants to choose from but we were alerady running a bit late so we decided to stop right across the road from the station at the Artisan Food Co. This quaint restaurant has a choice of beautiful salads, original flatbreads and sandwiches. The homemade soups were very good and they also sell some to bring home. The restaurant was busy with one end occupied by a group of the Red Hat Society which added a lot of colour to the venue.   We skipped dessert as we decided to pick something from one of the vendors at the market. The prices were reasonable and the portion generous. 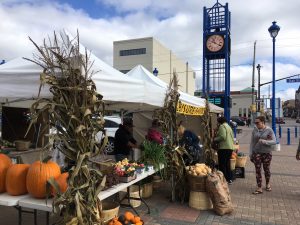 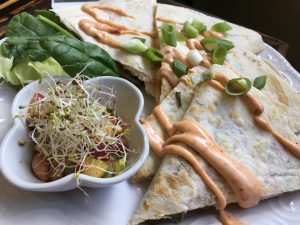 Lunch at the Artisan Food Co. bistro in North Bay

Our Next Stop, Mattawa One of the 22 giant sculptures in downtown Mattawa

We discovered downtown Mattawa and admired some of the 22 giant sculptures that highlight the explorers and voyageurs who travelled in the area a few centuries ago. I recommend you stop at the information kiosk to pick up the brochures of the sculpture as they are not all identified. These sculptures were done by local artists, including Peter Ciafriani, Gary Johnston and Clermont Duval. We decided to visit Clermont Duval’s art gallery to see some of his other work. Clermont was A visit to the cemetery in Mattawa

absent but we had an interesting conversation with his son who is also an artist. We took time to look at Clermont’s magical paintings – as you look at the paintings under the light, a totally different story appears before your eyes!

Our next stop was a bit unique as we went to the Mattawa Roman Catholic cemetery to find Arthur Ferland’s monument. Our first President’s Suites house, the Villa, was constructed by Arthur Ferland. He was married to Louise Timmins, the sister of the Timmins brothers who invested in the Cobalt and later in the Timmins area mines. The Timmins family had a general store in Mattawa – the building is still there and very prestigious. After organizing more than 25 President’s Suites historical evenings which always include the characters of Arthur and Louise Ferland, we felt like we were visiting a family grave. Noah Timmins Senior is one of the oldest person buried in the cemetery.

Heading to the Quebec Side

Great view from the lookout in Témiscaming, Qc

We started our drive towards Témiscaming on Highway 533 up to Highway 63 – this secondary winding road is such a great drive. A lot of fun, not too much traffic and the fall colours were wonderful. This road is certainly a motorcyclist dream!  Just before crossing on the Quebec side, we stopped at the The Algonquin Canoe Company which has a gift store. In the Summer, it’s possible to rent canoes and kayaks or plan a trip with them. My mother bought me a nice scarf 🙂  The employee took time to give us some history of the area and their services they offer.

The town of Témiscaming on the Quebec side was certainly a pleasant surprise. We were expecting the normal wood industry town but we discovered a garden city. Back in 1918 the town was designed based on the English concept of a garden city. Today we can still admire the flower gardens and the works of art with an European origin. The fountain and Venetian Well is certainly an attraction on its own. After the fountain on Kipawa Street, we took Thorne street to go up to the lookout which offered a beautiful view of lake Temiskaming. 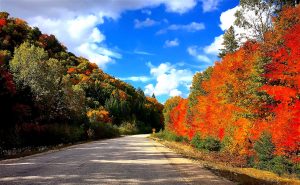 Beautiful fall colours along highway 533 between Mattawa and Témiscaming. 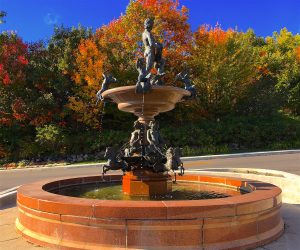 The fountain and venetian well in Témiscaming 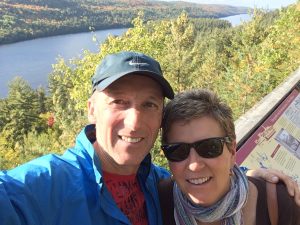 The mural in Laniel, Qc

Then, we made a quick stop in the town of Laniel to discover the murals. We were surprised by the quality of the multi-use ATV trails, which have been built on top of the old abandoned railway lines base. We just did not have enough time to discover the hiking trail systems around Laniel.  Laniel is located by Lake Kipawa and the Kipawa river which is famous for its white-water rapids and the annual Kipawa River Rally held in late June.

As we were heading towards Ville-Marie, we could see the change in landscape. The mixed forest with the maple trees changed to farm land quite suddenly. The farmlands are always pleasant to look at in the fall.

Sunset over Lake Temiskaming in Ville-Marie

When we got to Ville-Marie, we were barely able to get a photo of the sun setting down on Lake Temiskaming. We had hoped to be in Ville-Marie a bit earlier but I guess it is the way it is when you are on a discovery tour. If we would of arrived earlier, we had planned to go for some locally produced beer at the local micro-brewery, Barbe Broue Pub.  They have 5 original beers with one named after Devil’s Rock. We decided to skip the beer and head for dinner at the Bistro Elle et Louis in downtown Ville-Marie. This 50-seat bistro is decorated with recycled items and has a very original menu which on one side is creations from Louis and the other side by Elle. The ‘Elle’ is Nadia who is always there to serve you with some help on very busy days and Louis is in the back preparing the main meals. Nadia, is also a trained pastry chef and is very convincing in trying out her latest dessert creation (even if you are full!)

Our Final Drive Back Home to Haileybury

Then our final drive back home to Haileybury after a great day on our Lake Temiskaming fall tour. Too bad we didn’t have enough time to discover St-Bruno de Guigues, Lorrainville or Notre-Dame-du Nord. It will be for a next time and we will have to start our tour from the Quebec side. We got home a bit past 9pm. We had a great day discovering the region and spending quality family time.  Something I should do more often.  If you want to plan your own tour around Lake Temiskaming, I invite you to visit the www.laketemiskaming.com web site.

This Nature and Outdoors blog post has been written in October 2016 by Nicole Guertin, a volunteer collaborator to the Destination Temiskaming blog, co-owner of the President’s Suites, a history enthusiast and someone who truly believes in the potential of the Temiskaming region.

To learn more about Nicole.