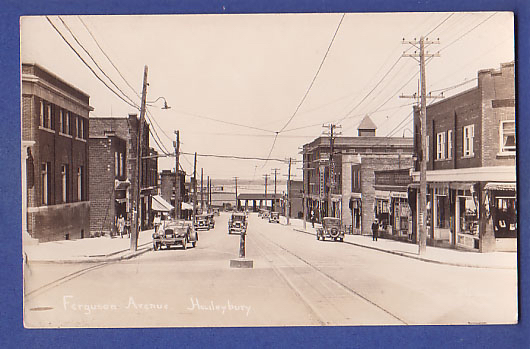 Do you remember the Abraham family and their Men’s and Ladies’ Wear store located on Ferguson avenue, downtown Haileybury?

The century old building was brought back to life when it was renovated in 2017 to become the Cafe Meteor Bistro.   The building reconstructed after the Great Fire has a rich history behind it with the Abraham family.   Read on to find more….

This text was written by Carol Henschel (nee Abraham), daughter of Frederick Abraham, granddaughter of Nimer and Shalabie Abraham.   Credit to Norman Abraham for his wonderful book about the Abraham family entitled “Reaching Into Yesterday,” which provided a great deal of this information.

Nimer Abraham and Shalabie Battah were born in the late 1800’s in Syria. Nimer grew up in L’Kraybee, a small village situated in a part of the country that is now within Lebanon.  Shalabie lived in the town of Rachaya, close to the Syrian capital of Damascus. At that time, the Turks and Arabs ruled Syria with a vengeance. Historical documents have confirmed stories of Syrians being beaten, robbed, or killed for not being able to pay their taxes. Sometimes, their sons and daughters were kidnapped, never to be seen again.

Before the turn of the century, Nimer and Shalabie, who were wed in their teens, left their home country with other family members to escape the fear associated with life in Syria. They first settled in Rio de Janiero, Brazil, but soon learned the economy there was too poor to support immigrants.  They were told about the “north country” of Ontario, Canada, where business opportunities were becoming available through mining, logging, farming, and railroad expansion. Nimer, Shalabie, and two of Nimer’s brothers ended up in North Bay, where they established a home base for their new and prosperous peddling business. From there, they ventured into Parry Sound, Mattawa, Deep River, Ville Marie, and Nipissing Village, selling their goods to farmers who were happy to avoid the long and arduous trek to distant towns.

In 1903, the Northern Ontario Railway reached Cobalt, where the discovery of silver grabbed the attention of thousands of eager prospectors.  As good fortune would have it, Nimer and his brother, Rachide (Dick), were enticed by the economic opportunity for new business.  They decided a move to Cobalt was in order, and before long, sales were so promising that Nimer and his brother opened a department store on Lang Street, near the Miner’s Tavern.  It was in Cobalt where Nimer and Shalabie’s family grew to include five children.

In 1916, a fire destroyed the store.  Although a great deal of merchandise was lost, Nimer and Dick had enough savings to allow them to open their first department store in Haileybury, on the present site of Tri-Town Bowling Lanes. Nimer and Shalabie lived above the store.  Within a few years, three daughters were born, which increased their family size to ten members strong.

Fire struck once again in the fall of 1922.  The “Great Fire,” as it is called, is considered to be one of the ten worst natural disasters in Canadian history.  Over two days, the fire consumed an area of 1680 square kilometres, killed 43 people, and left thousands of people homeless.  It was time to re-build once again.

Dick and his wife, Salemi, who had six children by then, moved to Timmins to open a clothing store. Nimer opted to remain in Haileybury, and after two temporary sites, set up on a permanent basis in a building located at 485 Ferguson.  He called his store “Abraham’s Men’s and Ladies’ Wear.” By that time, two new male children had been born. The business survived reasonably well through the depression. A store dedicated to women’s clothing, “Abraham’s Ladies’ Wear,” was opened across the street. Life continued that way until Nimer passed away in 1950 after an operation to repair a hernia. Shalabie survived until 1962, when a heart attack claimed her life.

Several of the children continued running of the store until 1976, when Abie, the oldest male child, died suddenly. The two youngest boys, Norman and Fred, decided to become partners in the business on a trial basis. Later that year, the trial ended, and Norman decided to become the sole owner of the “Showcase,” located a few doors down.  Years later, the Showcase was torn down to allow for the construction of an apartment building at the corner of Ferguson and Broadway, and Abraham’s Ladies’ Wear changed hands.

Fred Abraham, an eccentric, kind-hearted man, continued to do his best to run what was now Abraham’s Men’s Wear. His wife, Carmen (nee Gauvreau), worked long hours to help with the business while raising their four children. Stories have been circulated about local men and women enjoying a shot of whiskey in the back of the store, and about Fred’s interesting methods of bargaining with customers.

These stories are all true; I can confirm them, since I have vivid memories of how my father ran the store for so many years.  In 1993, Fred died of a sudden heart attack, and the clothing store closed for one last time.

A great journey, which spanned an ocean and a century, led to many Abraham descendants settling in Ontario.  As for this building, every player in this story would be proud to see prosperity live on in the place they loved… and called home.

About other Syrian families

OVER THE HILL by Diane Armstrong for May 3, 2018 (Timmins Times)

In 1900, Khalil Farah (Big Pete), a Syrian, arrived in Thornloe where he built a hotel. In June of that year, another Syrian, Richard Zahalan, settled in New Liskeard and conducted a real estate business. Elias Abraham opened a butcher shop in Thornloe, but soon also owned a food store in New Liskeard as well. When the local newspaper’s building burned, Kalil Farah offered space in one of his buildings so that they could continue to publish. Farah also built a steam plant which supplied electricity to the town of New Liskeard.

A pioneering Haileybury family fled Syria, and to quote from Norman Abraham’s book, Reaching into Yesterday, “My parents were born in Syria. They lived in constant fear of the marauding Arabs and Turks who ruled Syria… If the householder was unable to immediately pay the taxes, the occupants were beaten, robbed and sometimes killed… They fled their home with very little money, boarded a cattle boat and eventually settled in North Bay… and with 200-pound packs of goods carried on their backs, my dad and uncle became travelling peddlers – on foot. The farms, logging camps and small settlements were ideal for peddlers.”  Their route took them to Parry Sound, Mattawa and Deep River. They moved to Cobalt in 1903. Eventually a store was opened in Haileybury and Abraham’s Men’s and Ladies’ Wear became a family-run business for many more years. (I cannot find a closing date but was open at least until the late 1970s).

It was Khalil “Big Pete” Farah who maximized water power in Temiskaming. He was one of 14 Syrian immigrants in New Liskeard and a very ambitious entrepreneur.  Always looking for an opportunity to make money, Big Pete built the first power station in New Liskeard at Chester Falls in 1906 by building a dam on the Wabi River.  He eventually powered Charlton, Englehart and Tough Oaks mine in Kirkland lake. Eleven years later, he sold the Wabi plant. Today, visitors can admire the beauty of the rapids and waterfalls at Pete’s Dam Park.  A savvy businessman, he also constructed New Liskeard’s first hotel—the Canada Hotel—on the North bank of the Wabi river.

This article about the Abraham family was written as part of the Destination Temiskaming blog.
To read more articles about our Temiskaming region and its people, follow the web link to the blog.